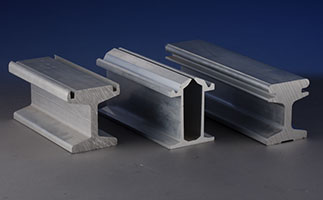 Aluminum I beam for ships mechanics: a beam is placed horizontally on both supports and the beam is bent when the beam is subjected to downward pressure perpendicular to the axis. In the upper part of the beam compression deformation occurs, that is, there is compressive stress, the closer the compression of the upper edge of the more serious; tensile deformation occurred in the lower part of the beam, that is, tensile stress, the closer the lower edge of the more serious stretch. The middle layer neither stretch nor compression, so no stress, usually called the neutral layer. Due to the contribution of the neutral layer to bending is very small, so often used in engineering instead of square beam I beam, hollow tube instead of solid column.

I can help you
Send